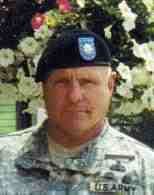 Lieutenant Colonel Dale T. Jensen, age 51, passed away unexpectedly Wednesday, September 26, 2007 in Sparta, Wisconsin. Dale was born on May 12, 1956 to the late Otto and Viola (Barkow) Jensen in Wild Rose, Wisconsin. On September 7, 1985 he married Kathy Aspeslet, and together they had three sons. Dale enlisted in the US Air Force, in 1974, and then when he left the Air Force in 1980, he joined the Army Reserves, obtaining the rank of Lieutenant Colonel. He proudly served his country, earning several awards and decorations.<br />
<br />
Dale is survived by his wife, Kathy; sons, Private Bradley Jensen, Will Jensen and Erik Jensen, all at home; and two sisters, Patty (Vernon) Jensen, and Lois Gamner, both of Texas. He further survived by many relatives and friends. Dale is preceded in death by four brothers, Randall, Elwood, Alan and Darrell.