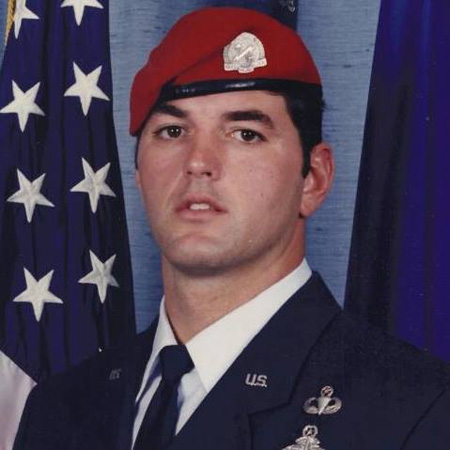 Jeffrey “Jeff” Wayne Bray, American Hero, 49, of Whiteville, N.C., formerly of Asheboro, died Monday, Oct. 24, 2016, at Columbus Regional Healthcare.
Jeff was born Dec. 9, 1966, at Randolph Hospital. He attended Loflin Elementary and South Asheboro Junior High and was a 1985 graduate of Asheboro High School, where he played football and ran track..
After graduation, Jeff enlisted in the United States Air Force and entered Basic Training on Aug. 5, 1985, at Lackland Air Force Base, San Antonio, Texas. He distinguished himself as the man you wanted having your back. Even though Jeff had a 25-plus-year career as a Combat Controller and military contractor, he is best known for meritorious actions in Somali, that were later portrayed in the “Blackhawk Down” movie. Jeff was awarded the Silver Star Medal for his conspicuous gallantry and intrepidity in connection with military operations against an opposing armed force near and around Olympic stadium on Oct. 3-4, 1993, in Mogadishu, Somali.
Jeff is survived by wife, Sherry Blackman Bray of Whiteville; mother, Martha Lindsay of Asheboro; brother, John Bray and wife Nora of Raleigh; sister, Stephanie Lindsay of Asheboro; nephews, Cooper and Jack Bray of Raleigh; grandmother, Mary Emma Bray of Staley; and his beloved English bulldogs, Hefner and Miss Daisy.
He was preceded in death by father, Johnny Bray; dad, Melvin Lindsay; and grandfather, Wren Bray.

S/Sgt. Jeffrey Wayne Bray, 49, of Whiteville died Monday, October 24, 2016 in Columbus Regional Healthcare System. He was born in Randolph County on December 9, 1966, the son of Martha Woodell Lindsey of Asheboro, NC and the late John Franklin Bray.  He was a decorated veteran of the US Air Force,  a Senior Airman having  served with a  Combat Control Team and was awarded  a Silver Star Medal.

The President of the United States takes pleasure in presenting the Silver Star Medal to Jeffrey Bray, Staff Sergeant, U.S. Air Force, for conspicuous gallantry and intrepidity in connection with military operations against an opposing armed force in Mogadishu, Somalia, from 3 October 1992 to 4 October 1992.  On these dates, Staff Sergeant Bray, a 24th Special Tactics Squadron Combat Controller, was attached to a joint service search and rescue security team tasked to respond to the crash of a United States UH-60 helicopter.  While serving with a U.S Army Ranger element trapped and surrounded inside a building in the city, Staff Sergeant Bray coordinated helicopter gunship fire on targets all around his position throughout the night.  He developed tactics and techniques on the spot that allowed him to mark friendly forces' locations so that helicopter gunships could destroy close enemy concentrations.  By his gallantry and devotion to duty, Staff Se