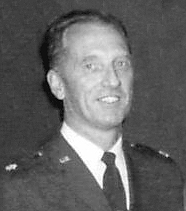 Accomplishments, awards and medals important to him included serving the Episcopal church as acolyte and junior boys choir member; graduating Westport High School at 17 and enlisting in the Army Signal Corps, later transferring to Army Air Corps and serving his country (during which time he was rescued after a water jump from a crippled B-29 in Japan), until World War II ended. He then joined the Air Force Reserves, completed college at Kansas State University and was recalled to active duty as a first lieutenant during the Korean War. While a staff officer, he wrote the first operations manual and introduced the original uniform for Combat Control.

After establishing Combat Control teams throughout Southeast Asia and spending much time in Vietnam and Laos, he returned in 1975 to Eglin Air Force Base as commander of the Transportation Squadron, where he retired in 1979 after 35 years of military service.

On retirement, Dick created, owned and operated with his family “Olde Towne Soda Fountain. ” He founded and was first president of the Combat Control Association; served seven years (one as president) on the Board of Directors of PAWS; stayed active in Sigma Nu Fraternity, the Fort Walton and Eglin yacht clubs, life membership in TROA, American Legion, VFW, DAV, and various volunteer programs.