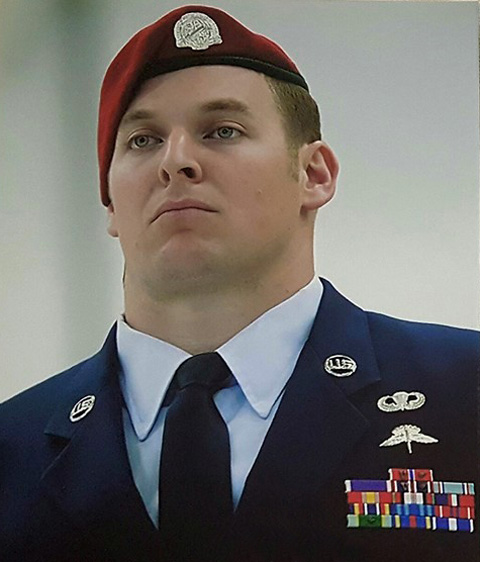 Staff Sergeant Sean R. Harvell was taken by the sea Tuesday, April 26th, 2016 in Long Beach, California. He was 33 years old. <br />
<br />
Sean was born on November 9th, 1982 in Long Beach to his mother, Jane Maher and father, John Harvell. Sean was raised in Long Beach where he enjoyed playing football, and skateboarding with his friends. After high school, he joined the United States Air Force where he became a part of an elite brotherhood as a Special Operations Combat Controller. <br />
<br />
While serving his country Sean volunteered for four deployments to Afghanistan where he earned two Silver Star Medals, three Bronze Star Medals for valor and two Purple Heart Medals. The heroism that Sean displayed in battle was exceptional; his actions against the enemies of the United States are legendary. Sean’s tenacity and determination earned him the respect and admiration of Special Operators around the world. He had the spirit of a Viking warrior that many have tried emulate but that few have been able to. <br />
<br />
After his third deployment Sean moved back to Long Beach where he helped bring his daughter, Lily Jane Harvell, into this world. Lily was the light of his life and his compass. <br />
<br />
Sean’s passion for riding and working on anything with two wheels, but mainly his Harley Davidson, cannot be overstated. He loved to, as he’d say, “Ride and Ride!” After leaving the Air Force Sean started his own motorcycle repair company, the 710 Speed Shop, before working overseas as a defense contractor. <br />
<br />
Sean was extraordinary. He blazed through life with the passion and fury of a wildfire who etched his mark on the souls of everyone around him. Towards the end of his short life he found comfort and guidance in Buddhist teachings. <br />
<br />
He was a loving brother and mentor to Andy Harvell and Analese Eder. He was devoted to his family and truly cherished the time he got to spend with them during vacations to Higgins Lake in Michigan, Big Sur, King Canyon, and Joshua Tree National Park in California. <br />
<br />
Sean is preceded in death by his brother Andy Harvell who was killed in action as a Combat Controller in Afghanistan. Sean is survived by his daughter Lily, her mother, Tiffany Sidwell, his devoted mother Jane Maher, father John Harvell, sister Analese Eder, Uncle Billy Maher, Aunt Susan Maher, Aunt Julie Maher, cousin Scott Farago, cousins Ellie Maher and Joseph Maher, sister in law, Krista Harvell, nephews, Hunter and Ethan Harvell, and especially his grandmother, Mimi, whom he adored. <br />
<br />
Sean will be missed immensely by his many loving friends and family.

<hr />
CCT brothers, it’s with a heavy heart I let you know TSgt (R) Sean Harvell passed away last night. More details to come. There is a wounded warrior summit in Destin going on and the ST team is toasting HL at 11