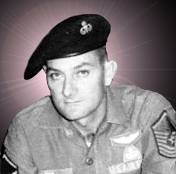 Bill retired in 1973 after having served 23 years of Honorable service with the Air Force. His last assignment was with the 463rd Combat Control Team at Dyess AFB, TX. Among many other demanding tasks. Bill was most instrumental in the accomplishment of psychological operations against the North Vietnamese and their collaborators while in charge of a Commando CCT.

….to you Bill, may you "Rest in Peace " with our love…Comrade